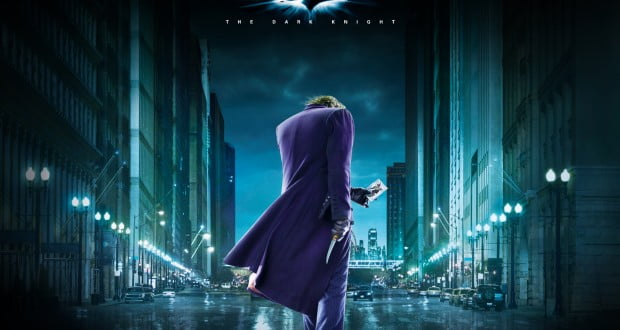 The Dark Knight: Not the Best Superhero Movie Ever

Although I don’t spoil specific plot points, I do discuss in depth some themes of the movie that would give a lot away.

Christopher Nolan’s The Dark Knight is not the best superhero movie ever.

The good superhero movies of recent years (Spider-Man 2, Iron Man) have followed a fairly standard plot structure: the superhero’s powers define not only his own moral code, but the framework of his nemesis. What takes place in the course of the story is the external projection of an internal struggle, until the superhero defeats his enemy in a fistfight symbolic of the overtaking of his own demons.

Batman Begins, in my opinion, was the best superhero movie of all time for this reason. Bruce Wayne’s “powers” come to him through his dedication to the greater cause of Justice. Alfred represents his own conscience, and Ra’s Al-Ghul articulates the thirst for vengeance that sleeps deep down inside Batman. Ultimately, Wayne’s moral code triumphs: that of justice, not born of vigilantism, but out of a real thirst for peace and harmony.

The Dark Knight has its own superhero: Harvey Dent. He is described throughout as the “white knight” of Gotham, while Batman’s “dark knight” moniker is only implied by contrast to it. The real dychotomy, the dialog that takes place in The Dark Knight is between Batman and Harvey Dent. Batman is initially rendered obsolete by Harvey Dent, who rallies Gotham under his leadership and banishes the ghosts of crime. Harvey Dent couldn’t have accomplished this without Batman, of course; but Batman likewise needs Harvey Dent to center his morals in a coherent frame. Dent, quite simply, is the pillar on which Batman’s moral code rests. Without Dent, there would be no justice in the way Batman envisions it.

And then the Joker comes in. He is not a villain in any traditional sense of the word. Even using the word “character” is rather inappropriate. The Joker’s role in The Dark Knight is closer to that of the Oracle in homerian tales, which announces the wrath of the gods. He is the Oracle, but also the god itself, striking chaos into the heart of Gotham. He is not a terrorist but Terror itself. He is Shiva, come to this world to test its mettle. To test Batman and Dent’s equilibrium.

The sense of gloom and despair seeping out of The Dark Knight comes from this very traditional device of the Oracle announcing impending doom, then the gods enacting it. The Joker never loses; he is never truly put to the test. All he does is carry out his plans, assaulting not only Gotham, but Batman and Harvey Dent’s own moral framework. The Joker puts it in sublime terms himself when he says to Dent, “I am just a mad dog chasing cars.”

Until the framework breaks.

What happens next is the deconstruction of the white knight: how Harvey Dent’s approach simply cannot work in the context of chaos and social frenzy brought on by the Joker. Dent holds on for the longest time, while Bruce Wayne doubts his own role, as he naively sees himself as a white knight lurking in shadows. Alfred is the first one to point out the need for a new approach, that of realism: “Endure. You can be the outcast. You can make the choice that no one else will face – the right choice.”

And so, as the white knight of Gotham falls and becomes a creature of pure chance, the Dark Knight rises from its shadow.

Batman, who will spy on the whole of Gotham to get at his enemies. Batman, whom cops fear and accuse of murder. Batman, who must take upon himself the pain and anger of others so the city will endure. Gordon says it himself: Batman is not a hero. He’s a guardian.

Batman rises from the corpse of Harvey Dent like a malevolent shadow, prepared not to do what’s right, but what’s necessary. The Joker never won, and never lost; he is above this contest. He defines it, rather than play a part in it. Chaos has come and gone, and the balance is broken.

The Dark Knight is a morality tale, a conflict between two men in balance who see their roles crushed by the arrival of fate. It is a moral tale of the post-9/11 era, where good and evil simply dissolve in the face of chaos, and we are left to wonder how to reframe the world.

And that is why The Dark Knight is not the best superhero movie ever. It is something entirely different, much darker, and much more satisfying.

Update [2008-07-22 18:30]: I just want to point out that I’m not dismissive of the source material, or of the medium of comicbooks here. I’m fairly well-read in comics, and my point was more addressed to the existing conventions of superhero movies. Thing is, superhero movies, even when excellent, follow a fairly simple superhero formula. The Dark Knight, in my opinion, really transcends this formula, and offers a story that is set in the superhero genre, but well outside the superhero movie formula. The title of this post was specifically chosen to counter expectations, but loses in clarity. Hope that makes more sense.