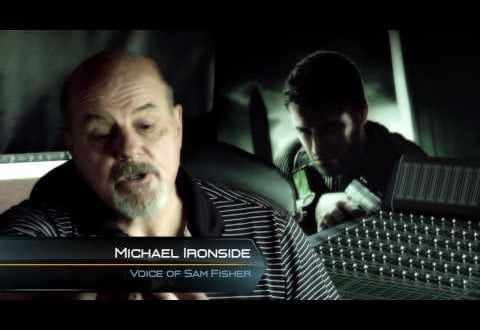 Long time no write! Thank you for your patience in reading this blog; it feels like I haven’t written here in ages. Truth is, I have been working for weeks on end, with nary time off in sight. For one week straight, I barely saw Hélène, as she would go to work before I would rise, and go to bed before I’d return. And yeah, that included weekends.

I’ve now been in Los Angeles for 2 weeks, and will stay here until next Saturday. I’m supervising the voice recordings for our game, a task that was supposed to take 10 days. Alas, those 10 days have turned into 20. So it’s Saturday night in my hotel room in Santa Monica, and I’ve been spending the day doing nothing. A whole lot of nothing, as a matter of fact : I didn’t step outside, and made generous use of room service.

Last week was most interesting, as we had Michael Ironside in the studio, performing the voice of Sam Fisher. Prior to this gig, Michael was known in the studio as being very difficult to work with, and the situation was abominably tense on the first day when he walked in. Some things upset him on the first day, so we made adjustments for the second. Turned out we did the right thing, because Michael warmed up immensely, and became quite friendly with us. He took the time to tell us about his life, and had many anecdotes to share in-between takes.

I’m very proud to say that by the end of the recording, Michael Ironside had been a true pro with us, and gave us a terrific performance. He seemed genuinely pleased when I told him I thought his voice work for us was great, and he thanked me personally and said he enjoyed working with me. He left me with the impression of a terribly intelligent, talented and complex man.

We still have a full week of recording ahead of us, but it should be more relaxed now that we got Ironside and most of the main characters wrapped up. It’s funny to step away from Shanghai for 3 weeks, and do this Hollywood thing. It feels like life in LA is all about catering to other people’s egos, and maintaining face. Funny that this would strike me so much since I come from Shanghai, where Face is supposed to be so much more important.

I leave LA on Saturday, and will arrive in Shanghai sometime Sunday. But on Friday night, we’ll have a propre ‘wrap party’ and go on a little cruise, before heading out for dinner and drinks. What can I say? It’s a Hollywood thing.