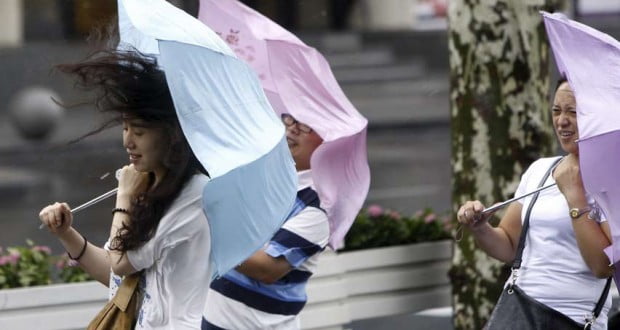 Stop Worrying and Love the Typhoon

Long time no post! I got swallowed up by a storm… No, no, not Typhoon Matsa! That went just fine. I’m just buried under work this week.

I was gonna post an update last weekend to reassure everybody that we were fine, but then I read some of the news from the US and Canada, and I noticed that nobody gave a damn over there about a typhoon striking China. Oh, sure, a hurricane hits Cuba and scares a few Canadian tourists, and it’s all over Nouvelles TVA, but a typhoon hitting Shanghai? Who cares! Nevermind that they were both Grade 4 hurricanes! It’s just a bunch of Chinese!

Well; anyway, I prefer indifference to dramatization, really. And for being in the typhoon itself, it wasn’t so much of a deal in central Shanghai. (Although I’m sure the 1.2 million people evacuated along the east coast of China would beg to differ.) Sure, we had the Producer chasing the team around and telling everybody to go home and not come work overtime on Saturday, but that’s about it. The most dramatic thing we saw was the pizza delivery guy from Papa John’s, who had to pay for Helene’s firm desire not to step foot outside, and delivered us a lukewarm pizza in the middle of the biggest tropical storm to hit Shanghai in 6 years. Fear not, he received a generous tip.

And then, at midnight on Saturday night, we started noticing a water leak along the patio door of our bedroom. Turns out our balcony was getting flooded, so I had to step outside in my underwear and t-shirt to frickin’ unclog the balcony drain with a plunger.

And no, you’re not getting them!