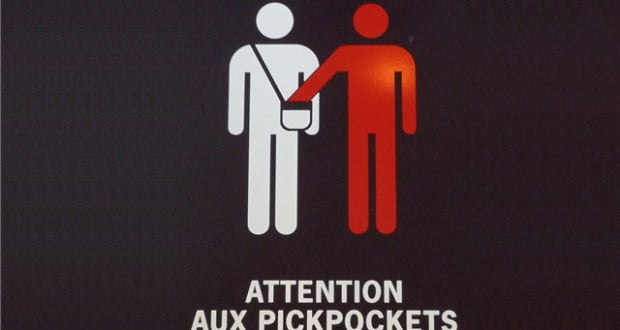 One of the key reasons people don’t try out independent travel is that they’re afraid for their safety. Many people traveling in tours or packaged holidays feel the traditional tourism structure provides them with safety and security against scams, thefts, and other crimes against tourists. In truth, Slow Travel is generally safer against theft than traditional tourism.

There are plenty of technical ways of protecting against thefts, from secret pockets to secure locks. But in my experience, the most important protections against theft are attitude and behavior. The best way to protect yourself against theft is to be an uninviting target.

Here are some common Slow Travel behaviors that will make you a less likely target of crime.

The most efficient deterrent against personal theft is to not stand out in a crowd. Travelers who seem out of place and uncomfortable in an unfamiliar setting are targets of opportunity for thieves, who see them as vulnerable.

By blending in, dressing in appropriate and culturally sensitive clothes, and acting like you know the place, you’re signaling that you’re familiar with your environment, and thus more likely to recognize the behavior of a potential thief. Blending in also means not flaunting your jewelry, credit cards, or expensive camera. The less inviting a target you are, the less likely a thief will single you out. The second best defense against personal crime abroad is awareness. If you pay attention to your surroundings, you will deter criminals before they even decide to act against you, by signaling that you are a difficult target that’s hard to distract.

Observing your surroundings also means learning about a place before diving in. Take some time to sit in a park or a café, and look at how people behave in crowds. Do they keep their hands on their bags? Are they careful with handling money in the open? Then you should consider doing the same. Paying attention to how people behave will help you blend in, as described above.

3. Get off the beaten path

There are so many reasons to step outside of well-trodden tourist areas, and security is one of them. Thieves, scammers, and pickpockets often congregate in touristy areas, because groups of tourists provide plenty of targets of opportunity. As a result, if you’re exploring areas less frequented by tourists, you will avoid the most obvious theft hot spots.

A word of caution: in countries where personal crime against locals is common, such as some countries in South America, you will not avoid it entirely by getting out of touristy areas. Make sure you know the general security situation before heading out. Which takes us to…

The best people to ask about safety and security in an area are the people who live there. They can tell you which areas to avoid, what the common scams are, and what behaviors to avoid. They will be glad to share information with you if you ask them. Hotel or guesthouse staff in particular probably have great insight on the subject of personal crime, since they are likely to have hosted tourists who have had first-hand experience with it.

This is not a surefire theft deterrent, but it will contribute to lowering your risk. Wherever you go, make sure to act in a friendly manner.

Thieves are often forced into crime by circumstance or necessity, and are likely to try and justify their actions through convoluted moral arguments. For instance, a pickpocket might consider it justified to steal from a rich tourist because they have so much money that they will not need all of it. Or a thief might feel morally justified to steal as a form of revenge for real or perceived historical slights against them or their country.

When you act nice to people around you, you are making it harder for a potential thief to justify stealing from you. If they see you treat people with dignity and kindness, your act might be in direct contradiction to the lies they tell themselves to justify stealing from you. Additionally, if you have friends within the local community, they will know that you can rely on these people to track the thief down. This makes you a much less appealing target than if you are constantly bickering and mistreating people.

All that being said, there are no absolute foolproof methods against personal crime. Nobody “deserves” to have their property stolen for failing to guard against it. If it happens to you, don’t be hard on yourself. Learn from the experience, and share your hard-earned wisdom with others. Likewise, don’t think yourself invulnerable because you act in the way described in this article. Stay vigilant, and lock your belongings.

Have you ever been a victim of theft on the road? What behaviors would have prevented the theft?

Previous: The Tailgate Markets
Next: Slow Tip: Cheapest Flight out of Here 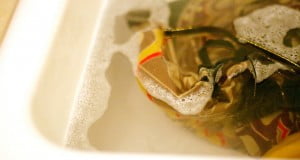 Socks and Sinks: Washing Your Clothes On the Road