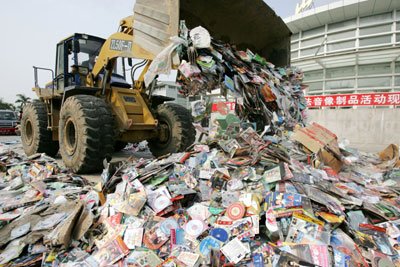 BoingBoing posted a hilarious link on reviews of DVDs bought right off the streets of Shanghai :

In the immortal words of Homer Simpson : “It’s funny because it’s true!!” If you thought DVD piracy in Shanghai was a high-tech enterprise, check this one out. It’s actually a very accurate portrayal of the quality we get when buying movies that are still in theaters.

When I arrived in Shanghai 2 years ago, I was delighted to see that American Pie was already available in the streets 2 weeks before theater release in North America. Much to my dismay, the DVD turned out to be a production cut that was still missing the music score… It totally ruined the movie for me.

That’s why nowadays, I only buy DVDs of movies that were released in the format in the US. Those ones are burnt on DVD-9’s, and are identical copies to the official DVD. Aside from the occasional skipping, they are equivalent to a “real” DVD.