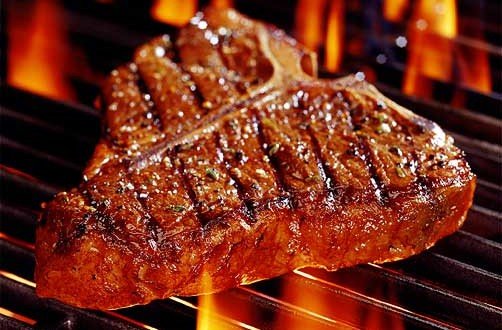 I’ve been thinking about food a lot, lately.

One of the central modern problems raised by eating is that of meat-eating. I’m not deaf to the cries of animal activists; I agree that the treatment of animals by the meat industry – reducing animals to commodities whose suffering is inconsequential – is morally reprehensible.

I’ve been a vegetarian before (although I was very young at the time), and I’ve been giving serious thought to vegetarianism lately. It would certainly please Hélène, who has what I’d call ‘vegetarian tendencies’.

Yet I’m currently leaning away from vegetarianism altogether. What I have in mind is something I haven’t found a handy term to file under… Happyvorism?

My current thinking leads me to think that eating meat can be ethically acceptable. I believe that the eating of animals is part of human nature, and during the evolution of Humanity, we have influenced other species to depend on our own desire to eat or domesticate them in order to thrive.

What I do resent, however, is making any of the animals I eat suffer before they get on my table. And unfortunately, our Western way of approaching meat has led us to tolerate a whole lot more suffering than we should.

In Asia, it is customary to leave certain parts of the animal in the dish when it reaches the dinner table. For instance, if you ask for fish in China, you will get the head. Refined diners will know that the eyes of a fish do not lie about its freshness, so leaving the head is a way for the restaurant to stay honest. Likewise, if you ask for chicken soup in most restaurants in China, you’ll get the legs and the head as well.

Now, this disgusts many Westerners. These parts are too “chickeny” – they are associated with the live animal, not the meat we have at dinner. This is exactly why I think they are important: whenever we are forced to confront the ex-animal we now call meat, we are one step closer to our decision being a lucid one.

In other words, chicken feet and fish heads are ways to keep us honest about our food. And if you stop ignoring the fact your steak used to be a cow capable of anguish and suffering, you suddenly care about how they lived.

And so, I’ve made the conscious decision, recently, to only allow myself to eat meat that comes from small-scale, sustainable farms. This kind of meat usually comes from animals which have been allowed to grow and live in conditions resembling their natural state, and thus probably felt “happy” about their existence. I also hope fervently that this also means their slaughter was as humane as possible, and that suffering was kept to a minimum.

There are two things I’m hoping to accomplish to prove or disprove this position:

1. Become a vegetarian. I’ve heard it said that you are not in a position to make a judgment about the ethical implications of eating meat if you are a meat eater. I would be very happy to undergo the process, to know exactly where I stand on the issue. I’ve done it with cigarettes: I’ve quit smoking “temporarily” in 2000 to verify that I was smoking out of a genuine enjoyment of the activity. I haven’t touched a cigarette since.

2. Kill an animal myself. That might sound like it flies in the face of point number one, but I think it’s the logical extension of it. If I’m going to pretend to be fine with eating an animal, I want to take part of this final step, slaughter, and make sure I am comfortable with it in practice as well as in theory.

I’m pretty convinced that with these two steps taken, I will be in a better position to affirm my ethical beliefs concerning meat eating. Whether I decide to avoid meat altogether or actually revel in it, remains to be seen.

One thing for sure, though: I don’t need to see an industrial meat-packing plant to know I cannot ever feel good about myself by eating at McDonald’s. That part of the food chain is definitely behind me.

Post Scriptum: A lot of my current thinking has been fueled by Michael Pollan’s book, The Omnivore’s Dilemma. If you’re at all concerned about what you eat and the ecological, financial and ethical implications of it, then you owe it to yourself to read it.

Previous: 100 Things to Eat Before You Die
Next: Hail to the Lich King, Baby