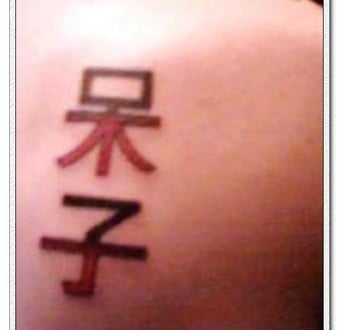 Thinking of getting a Chinese character as a tattoo? My sincere advice to you: Don’t do it!

Chinese character tattoos appear exotic and mysterious to many people in the West, but after two years in China, I’ve come to think that it is a ridiculous thing to do, no matter what the tattoo says. Let me give you an example.

Say you’re born in 1973 or 1985, and you’d like to commemorate the fact you’re an Ox in Chinese astrology by getting a tattoo of its representative character, 牛 (“niu”). Sounds good, right? Unfortunately, 牛 is a very useful character: 牛肉 means “beef meat”, and 牛蛙 means “bullfrog”. See what I mean?

See, the problem with Chinese characters is that Westerners somehow misunderstand their role in language. We tend to see them as representing a single concept, and it’s not really the case. Rather, characters are closer to actual prefixes or suffixes. Getting a single Chinese character as a tattoo would be alike to getting “para” as a tattoo. “para” is used in a lot of words (paranormal, paramilitary, parascholar, etc.) and there is a certain meaning attached to it, but by itself, it means nothing.

So, how about a complete word, then? The problem becomes that you’re essentially writing a common word on yourself. It might sound exotic in Chinese, but as soon as you start understanding the language, trust me, it sounds pretty dumb. Imagine a Chinese girl with a badly-written word such as “love” or “kitten” tattooed on her, and you get the picture. If you get your tattoo in the West, chances are the tattoo artist is not a native writer of Chinese, and he’ll write it in the way of a first-grader who is learning to write by imitation.

I’ve seen some Chinese girls with English tattoos, and the effect was far from impressive. One girl in a bar had her name tattooed in Pinyin on her shoulder, and the letter were so elaborate and poorly-drawn that even at 3 meters I couldn’t make it out. The only stylish tattoo I’ve seen using Chinese characters so far belonged to a friend who had lived here 4 years, and it was an old Chinese proverb done stylishly by somebody who actually knew about calligraphy.

Unless you manage to read some 汉字… I would just advise against it.