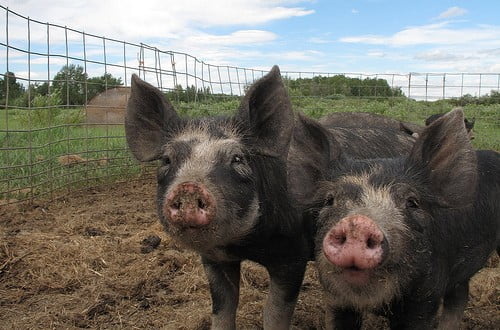 When I last wrote, Helene and I were on the tail end of our Middle Eastern trip. Nearly four months later, I’m happy to report that we’re picking up our wanderings where we left off.

Tomorrow, Helene and I board a plane for Mexico City, from whence we will explore Mexico, and eventually the rest of Latin America.

But first, let’s catch up… Here’s what I’ve been up to in the last few months.

Following our visit to Syria, Helene and I parted ways briefly while I continued to explore the Middle East on my own. I visited Lebanon, Jordan, as well as Israel and Palestine.

I had an amazing time in the region, and I left a large piece of my heart back in the souqs of Syria and the meandering stone paths of Jerusalem. Everywhere I went, kindness and open-hearted curiosity arose from strangers of all ages, religion and income level. The countries of the Middle East are safe, welcoming and amazing to discover, and I long to go back.

At the same time, for the first time in my travels, I found myself unable to write about my experience. I was not lacking for beautiful encounters and wonder-filled meals; but there was a deep human experience here, and it took me months to process it.

That’s not to say I will not write about Lebanon, Jordan, Israel and Palestine on this blog. I’ll keep these stories as a complement in our upcoming travels. Stay tuned.

After a few weeks back home in Montreal, and processing the immensity of our travel experience, I decided to visit a place which, in many ways, was farther away from my life than India or Syria.

I spent a month on an organic farm in Alberta, with my friend Jerry Kitt, owner of First Nature Farms, where I worked as a volunteer farmhand. I expected hard, physical work, and got plenty of that. But I also had a unique opportunity to take care of animals such as chicken, turkeys, pigs, cows and buffalo. This taught me a great deal about the origins of our food, and the extraordinary people who raise it for us.

When I think back on my time at the farm, I miss the physicality and the exhaustion of a long day of good work. I miss the rebels, the iconoclasts and the free thinkers that populate rural Alberta. And most of all, I miss the pigs, playful and energetic, who chewed my shoes into nonexistence as I fixed their water feeder. 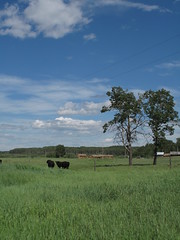 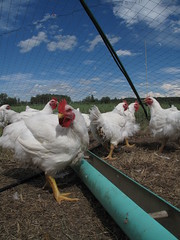 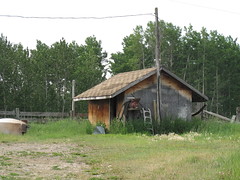 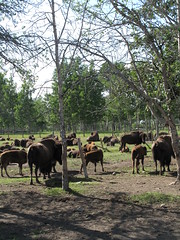 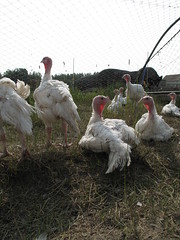 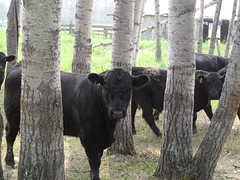 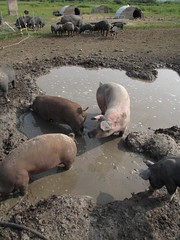 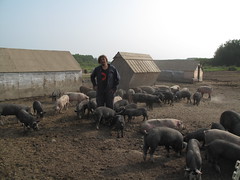 Me and the Pigs - First Nature Farms, Alberta, Canada

Back in Montreal, I found myself in Mattersville, the home of my great friend and traveling companion, François. François runs barefoot, and I soon caught the bug. Running entered my life, and turned it upside down.

For the last two months, I have run over 100 km on tracks, streets, hills, and forest hiking trails. I have run two 5K races, in Montreal and Oka.

Running is my new love; so much so that I have considered launching a parallel blog to this one, The Backpack Runner.

Expect to hear about my running in the periphery of this blog.

Helene and I have decided to keep traveling for the foreseable future. We still have some money saved up, and before it runs out, we`re planning on finding somewhere to settle down for a little while.

My criteria for a good place to live are simple: it has to be somewhere warm, where I can run every other day, and eat fantastic, simple food that make me want to blog about them here.

You’re up, Mexico. Let’s see what you’ve got.

I want to give a very special shout-out to my best friend François, who opened the doors of his home while I returned to Montreal for a few months.

François went so far as to let me use his bed, and moved into a tiny side-room which, he insisted, was perfect for him, and allowed him to get in and out of the house without waking me in the morning. But most importantly, he never complained about my presence, and after months of living with me, still hugged me hello as if we hadn’t seen each other in months.

François, you humbled me with your generosity, and you humble me still with your friendship. Every time a stranger offers me kindness, shelter or a bite to eat, I will see the echo of your soul in their smile.

Previous: United in the Joy of Ice Cream
Next: A Taste of the Ciudad 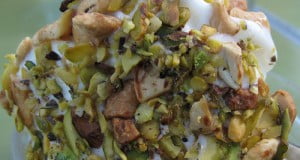 United in the Joy of Ice Cream 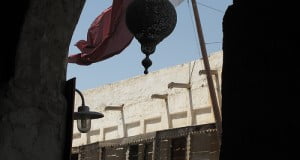