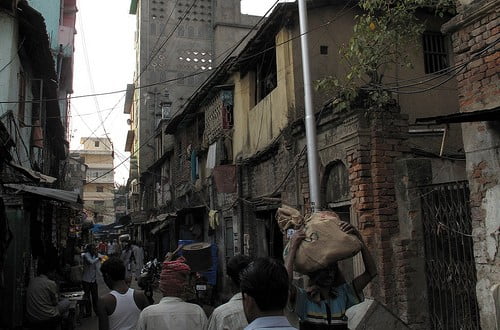 Posted by: Daniel Roy in The Backpack Foodie February 5, 2010 9 Comments

A middle-aged woman in a saree squats barefoot in the dirt of the sidewalk. She sings to herself softly, in spite of her hard life; the sound barely rises above the roar of cabs and the furor of the city’s life.

Her name is India, and I’m in love with her.

For many travelers coming to India, poverty immediately strikes them and overwhelms their impression of the country. This is especially true of Kolkata (formerly known as Calcutta,) whose suffering was painfully highlighted by the work of Mother Teresa. The poverty definitely persists in the West Bengal capital; it stares at you at every street corner, not only in the plight of professional beggars, but also in the short, hard lives of manual workers, rickshaw pullers, and tea stall boys.

But left untold in so many tragic travel tales is the joy and exuberance that pushes through. Look close enough at the teeming mass of humanity, and there is joy poking through the grit. Life shines through in the songs of the people, in the laughter and the smiles that soften faces caked by hardship.

It’s not to say that this joy nullifies the hardness of their lives. If anything, it puts them in sharp contrast. But I cannot overstate the beauty of the joy that resonates through the city, day and night. For the first week, it has made my heart soar and ache at the same time, and I spent long moments with inexplicable tears of joy in my eyes.

Instead of trying – and failing – to capture my impressions of Kolkata in broad, unfair statements, here are some of the moments that touched my heart over the last week. I hope they give you a sense of the spiritual wonder, the joy, the pain and the immensity that is India.

Shared Papad
I drink chai on a bench on the sidewalk, oblivious to the screams of car horns and the bells of rickshaw pullers. A mentally handicapped young man walks by, laughing to himself. A cab driver shares his papad with him, and laughs along; and my heart soars with joy.

The Booksellers
It takes one woman and six men to sell me the book. The woman writes an extensive receipt for five minutes. A man next to her sticks a price tag on the back cover; the next one runs the book to the bagging counter, where number three will bag it; the fourth man, smiling, takes my money to the cashier at the back. The sixth snores softly at the counter, his head against a towering pile of books.

The Goatherds
We follow the goatherds the moment they cross under the elevated overpass. For once, the taxis are quiet, weary of startling the flock as it encircles them. The goatherds stop in front of a decrepit church: one of them milks a goat, storing the milk in a plastic water bottle.

The Exhibit
We sit in the grand hall of Kolkata’s Indian Museum. A woman in a red saree approaches Helene. ‘May I take your picture?’ The woman flashes her cellphone. Later, her husband convinces their daughter to stand between us for another photo. Somehow, surrounded by centuries-old works of art, we have become the main attraction.

Sharing Tea
Judging from the peace in his eyes, the tourist on the next bench has been here a while. A rickshaw puller rings his bell for him. ‘Please give this man a chai,’ says the tourist to the stall owner. The owner throws in a cookie as well. The puller grins, eyes bright; he’s lucked out, for a brief moment in his short, hard life.

A Strange Sight
“Look!!” says the Indian teenager; she laughs and points. Ten amazing things jump at me at once, but I can’t see what she wants me to see. “Look! A foreign woman in a saree!” The entire street, blind to the chaos and wonder of its own existence, laughs and waves as the blonde woman walks by.

A Tea Tray
The tea boy hands me steaming chai in two baked mud cups. I burn my fingers on them, and put them down on a low brick wall. The rickshaw puller tugs at the newspaper under my arm; he helps me prop it up as a tray, then sets me off with a grin and a pat on the back. I spill some tea on my shoes, but Helene gets most of it intact. 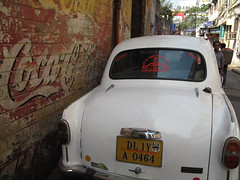 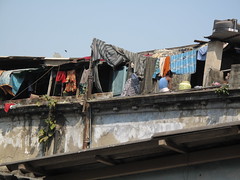 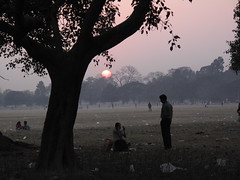 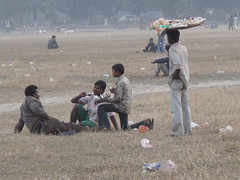 Snacking in the Maidan - Kolkata, India 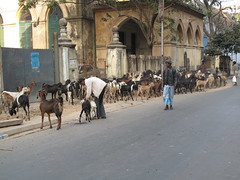 Goats in the City - Kolkata, India 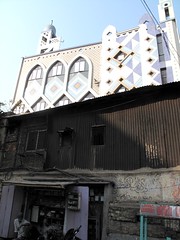 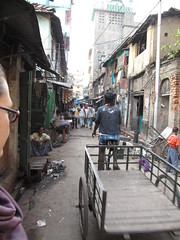 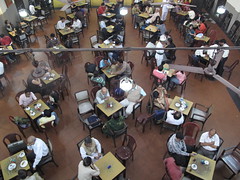 Previous: Farewell to Southeast Asia
Next: The Milk Alchemist 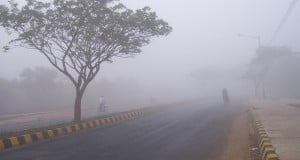 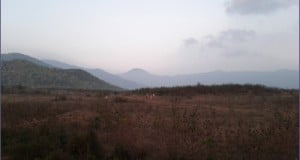