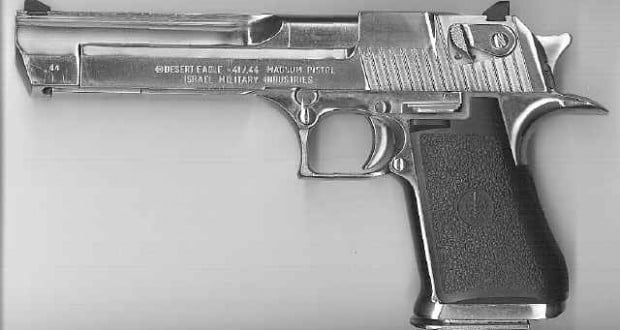 “We’ve never shot before. We’re looking for something fairly small, just to get a feel for it.”

“9 mil,” answers the cashier without hesitation. She’s Asian, petite and cute, in her early twenties.

“Right! Ok. But we’d also like something more powerful. See, we’re fans of videogames, and there’s a gun…”

“Desert Eagle.” The cashier flashes us a smile. She’s got us all figured out.

Dorian and I grin at each other: oh, it’s on. We’re about to shoot a gun for the first time in our lives, all in time to catch a movie. Just your typical Friday night at West Edmonton Mall.

Dinner and a movie. That was the Friday night Dorian, Helene and I had agreed on. But when we reached the movie theater, we realized we had 2 hours to kill. The movie theater being at West Edmonton Mall, we had a lot of options to kill time before the 10 PM showing, including glow-in-the-dark minigolf. That and the gun range.

I’m not a fan of guns. I recognize them as the lethal pieces of metal they are, and I’ve shunned them most of my life. I don’t think they’re glamorous, and although “guns don’t kill people”, they certainly make it a hell of a lot easier to do so. Even in videogames, I find the glorification of modern weapons to be troubling.

But I’m not one to pass up an experience, especially when it puts me outside of my comfort zone. And so, when Dorian suggested we visit the Wild West Shooting Centre in West Edmonton Mall, I knew I couldn’t pass up the opportunity.

Dorian and I stood in line while we waited for 2 booths to clear up. The firing range was much busier than I expected on a Friday night. The crowd was mostly young people, generally in their early twenties. There were some couples holding hands, and young girls gossiping as they waited for their turns. We all held a paper target; unsurprisingly, my zombie motif seemed pretty popular with the guys. The girls liked the cute-looking alien instead.

The range officer set up two booths side-by-side for Dorian and I. We had established through rock-paper-scissors that I would start off with the 9mm pistol. Dorian would be firing the Desert Eagle as his first shot.

I remarked to Dorian that it was a hell of a gun to first fire a shot with. The range officer laughed knowingly.

“It’s like losing your virginity to a hooker,” he said.

I have only ever held a gun once before. This time, though, I am loading the bullets one by one into the clip, loading the gun, and pulling back the barrel to chamber a bullet. I am holding a loaded 9mm pistol. I squeeze the trigger, trying not to blink from the expected bang.

Loud noise. A hole appears in my target.

The 9mm is instructive. I’m experiencing something new, and I can appreciate it on a philosophical level. How easy it is to point it, pull the trigger… it feels like you’re not part at all of that final hole in the paper.

After firing 10 rounds and emptying the clip, Dorian and I trade places. Dorian has a gleam in his eye from shooting the Desert Eagle. This should be good.

“When you’re about to fire, lean forward and push with your right hand. Pull back against your right hand with the left,” the range officer explains. This is to compensate for the recoil. Oh, gosh, he didn’t say anything about recoil on the 9mm, and yet I could feel it.

I load the Desert Eagle, and slowly squeeze the trigger. I push forward with the right hand, back with the left. I don’t know what to expect.

Holy CRAP. I feel adrenaline coursing through my veins. The shot is loud, even through my ear protectors. Dorian exclaims from the booth over that my own shot has deafened out his 9mm.

In that moment I understand the allure of the gun. The Desert Eagle is a heavy piece of destructive machinery. One second it lies quiet in your hands, and the next a bullet explodes in the chamber that sends your arms backwards.

I like it. A lot. I line up for my next shot, feeling a bit sad already that I only have 4 bullets left.

Stepping out of the firing booth, Dorian and I had big grins on our faces. Helene, who had shot a gun before, had preferred to go shopping for clothes while we did the manly thing. She didn’t quite expect our enthusiasm coming out. We both showed her proudly the numerous holes we had punched in the paper zombies, then showed her the Desert Eagle in the counter.

The rush of power lasted a while. Never mind that we had very little to do with it in actuality; the only thing we did was give our bank cards to the cashier, then listen patiently to the range officer as he explained how to load a gun. But even then, the sense of immediate power when the gun goes off was hard to dispel.

I was left wondering how people felt about using this power against other human beings. Can it overcome the dread of what would happen?

If anything, this intimate encounter with live firearms has given me a greater respect for what they represent. Now I know not only its destructive potential, but also its allure.

Before leaving, I checked the price list. There was a range of rifles I was eager to try next time.

Oh yeah. There will be a next time.