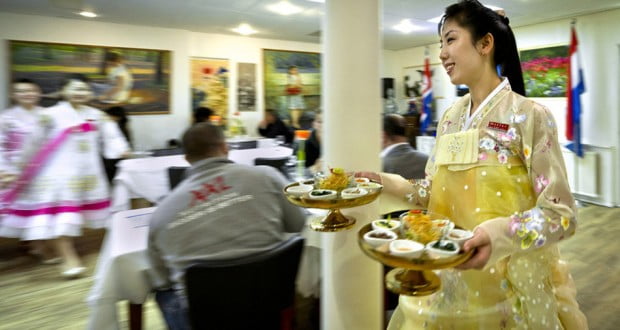 Many of us on Splinter Cell Double Agent are being phased out of the project. Myself, as producer, I would have stayed until the very bitter end… but since I am joining a new project in October in Montreal, the senior producer of the project will handle the final weeks, and then post-mortems, employee evaluations, etc.

So, I organized a last get-together for the expatriates on the team, last Saturday. And since this was intended as a night to remember, we took it to a very memorable place: the North Korean restaurant where I have celebrated my last two birthdays, possibly my favorite restaurant in Shanghai.

The restaurant was, I think, a huge hit. Approximately 20 people made it, which is a feat considering how the squeamish expats usually avoid any kind of ‘weird’ food. Yet there they were, nibbling merrily on some dog meat, and drinking, and sometimes even enjoying, North Korean alcohol made with fur seal penis(!!).

For Helene and I, the most memorable part of the meal was not the canine meat, but rather a 10-minute conversation we had with one of the waitresses. She was obviously fascinated by the rowdy crowd of foreigners in the restaurant, and she noticed that Helene and I spoke enough Mandarin to get by. So she approached us during the meal and chatted with us in North Korean-accented Mandarin.

When I think back on it, I realize just how far I’ve come in my experience of the world. Laughing and talking with this young woman, seven months fresh out of North Korea for the first time, was just a wonderful experience, and one I could never, in a hundred years, have experienced in Montreal. It was made all the more exciting by the fact that Mandarin was our common language. She was genuinely curious, had a very happy disposition, and seemed shy but excited about living abroad.

At some point, she asked Helene and I if we were brother and sister, since, according to her Korean eye, we looked alike. Ah, probably because we’re white, and you know how all whites are the same! We corrected her by saying that Helene was my girlfriend (女朋友, “Nü Peng You“) a term that seemed to confuse her. Before we left, she asked us to clarify in English: “Is she your Lady, or your girlfriend?” Ah, here it is: she was asking if we were a real couple, or a casual girlfriend-boyfriend pair. For some reason, this need to clarify this aspect stuck with me; it seemed very important to her, in order to fix her mental picture of us.

Before we left the restaurant, she insisted on giving us a small gift. We waited a few minutes, and the staff brought us some extra kim chi, seeing as we had asked to bring what remained on our table as a doggy bag. I think somehow, we made them a hell of a compliment by asking to take away their kim chi, which is a great source of pride in both North and South Korea. I was oddly touched by this offering.

And there you have it: right now, sitting in my fridge and stinking up everything forever, is kim chi made in Pyongyang, North Korea. Never have I been so proud of anything that stinks so much!