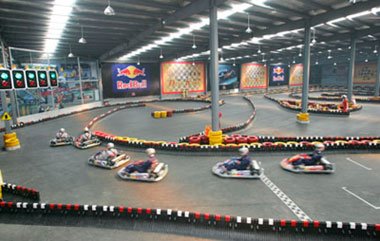 “I think I know what drunk driving feels like, now.”

That’s what my friend Ty said as he finished the race, his cheeks still reddened by the cool air of the track and by the rush of adrenaline. It was Saturday night, and we were go-karting.

You see, when newcomers learn about the existence of go-kart tracks in Shanghai, they rarely care. But there is an essential difference between karting in Shanghai and in North America: whereas in North America they have you wear a helmet and warn you against reckless driving… in Shanghai, you get to down a few drinks while you wait in the queue alongside the track, and they couldn’t care less if you rammed a pillar head-first at 50 km/h. It’s actually one of the big attractions of these karting tracks; there’s a complete sense of doing something forbidden by finishing up your beer before going to your next race. To say the administration overlooks this behavior is an understatement: you actually buy your coupons behind the bar, and in one go-kart complex, you get a free drink coupon, which you must use before racing.

It took me a while to get convinced to try it, but before long, I was standing in the queue, as Ty passed along a pitcher of Tsing Tao to the group. I had drunk a lot already, being as we had just arrived from teppanyaki, where Marine kept ‘sake bombing’ our beers. When the last call came at the restaurant, Marine ordered with aplomb: “We’ll have 3 bottles of beer, 3 glasses of plum wine, and 4 bottles of sake.” She paused, then added in Chinese, “That’s for us 3. I don’t know what the others want.”

And so, drunk enough to have trouble standing, we raced. It’s certainly reckless and it doesn’t mean I’d ever do it with a car (I don’t have a driver’s license: my go-kart training comes from Mario Kart) but it certainly was an experience to remember. Karting (drunk or not) was a rush, and I certainly hope to go again. I lost every race, and loved every second of it.

As I write this on Sunday afternoon, my head hurts slightly. And I can’t say whether it’s from a hangover or from some random whiplash. Awesome!