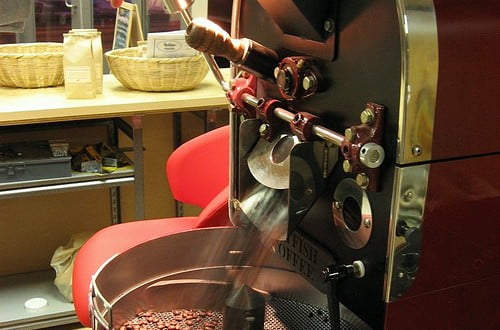 Posted by: Daniel Roy in The Backpack Foodie February 28, 2009 1 Comment

“We’ve gotta get Jack’s coffee sorted out before he gets here,” says Dominic. It’s only 7:15 – the market officially opens at 8 AM – yet there is urgency in Dom’s voice. I arrange the coffee bags faster.

Every Saturday since Catfish Coffee set up shop at the Old Strathcona Farmers Market, Jack sneaks in before opening hours, and gets his special order: decaf beans, roasted espresso dark. Dominic never fails to bring him a one-pound bag. In felt pen, he writes “Jack’s Blend” on the bag.

Sure enough, Jack shows up, right on time. He’s an amiable man, and he spends a minute chatting with Dominic as we rush to finish setting up the Catfish Coffee booth.

Jack is what Dom calls a “pro”. The pros make it early to the market, intent on snatching the freshest produce off the shelf before the masses can pick through them. They are organized: they bring lists, and know where to go.

I’m one of these pros, although my Saturday market routine involves spending a leisurely breakfast at the nearby New York Bagel Café. But today, I’ve beat them all, even Jack.

You see, today, I’m one of the vendors.

Over the last year, Helene and I have spent countless hours at the Catfish Coffee stand, chatting with Dominic and his fiancee Tracy. I’m as passionate about good coffee as they are about roasting it: and as surely as coffee begets conversation, conversation begets friendship.

For Dom and Tracy, the love of coffee means spending long evenings roasting their coffee by hand, despite having a newborn baby, and in the case of Dominic, a demanding day job. Yet every Saturday morning, they show up in time for Jack’s unofficial launch of the market day, with hundreds of pounds of coffee painstakingly roasted by hand, 5 pounds at a time.

Why do they do it? If you ever meet them go ahead and ask them that question. They’ll tell you they cannot imagine having it any other way; and their smile will leave no doubt they’re telling the truth.

The pros are meticulous in their appreciation of coffee. They ask questions about the roast, and sample the various blends. When Dom or I answer, you can see them lean forward across the table, gulping up the knowledge. They’re clear about what they like and don’t like, and the mere suggestion that they might not have a grinder at home makes their eyes widen in amused outrage.

Dom and Tracy give them friendly nicknames. Biker Al got his because of his omnipresent helmet. The Coach got his moniker for his seven daughters, enough for a baseball team. To Dom and Tracy, until they learned my real name, I was French Press, both for my native language, and my usual way of making coffee.

As the lunch hour approaches, the crowd thickens and changes. We’re entering Tire Kicker territory: that’s how Dom calls those who are just hanging out. We start seeing more and more Starbucks and other commercial coffee cups. Every time one cup-holding wanderer goes by without stopping to investigate the stand, I feel I’m on the darkened side of a one-way mirror. Will these people ever realize that they walked by the best coffee in town, while they sipped their Tim Horton’s?

Fortunately, others are curious enough to stop and ask a few questions. A minute of hearing Dom talk with knowledge and passion, and most of them will try a sample; and of those trying a sample, very few leave without a bag. The coffee speaks eloquently for itself; Dom and I are there to make the introduction.

If you ever stop by the Farmers Market, I dare you to ask Dominic about Fair Trade certification. While most of his beans are certified, he does not have the Fair Trade sticker on his bags. Doing so would require that he charge his customers as much as $5 more per pound, with not a penny going back to the producer.

But even worse, Dom has seen a decline in recent months in the quality of fair trade certified coffee. This is due in large part to the economics of Fair Trade: simply put, a grower must reach a certain volume of production before he can apply for certification; and because of market demand for Fair Trade, the only way for small growers to sell their beans in within a cooperatives.

During my visit to their retail and roasting location, Dom showed me a Fair Trade Costa Rican. The beans were uneven, some of them broken into pieces; he even pulled up rocks from the beans. This, Dom says, is the result of twenty-some farmers pooling their beans, and stopping to care about quality knowing it will be buried under nineteen others.

Then, one day, Dom and Tracy received a green bean bag from Harar, Ethiopia. The bag featured the crude picture of a horse, and was sewn shut by hand. When she opened it, Tracy found a surprise inside. It was a note, written by the grower, addressed to whoever would inherit the fruits of his labor.

Hope my beans are good, it said. If you have a problem with them, here’s my phone number.

Without knowing it, Catfish Coffee had taken its first step outside the comfort zone of Fair Trade certification. The world beyond was filled with producers too proud to abandon their beans to the anonymity of a coop. A world, unsurprisingly, very much like that of the Farmers Market.

Oh, and the Harar Horse? Best coffee I’ve ever had. Brew it fresh, close your eyes and take a sip: you can taste the soil it grew in, somewhere in the Horn of Africa, lovingly coaxed from the beans by Dominic and Tracy’s roast.

As closing time approaches, the Tire Kickers dwindle. The pros have moved in again: this is the crowd I usually join, when I’m not busy selling coffee.

I’m tired and exhilarated by my day at the market. Most of it has gone in a blur, and all I can remember are the powder of fresh ground coffee on my fingers, and my repeated explanations to customers about Catfish Coffee’s philosophy.

And it dawns on me: like Dominic, Tracy, and most of the vendors at the Market, I’m not here selling a product, but a worldview. Every time a customer walks by, I want them to taste the coffee, and share with me the feeling of walking off the beaten path of consumerism. I want them to see the world lurking behind the facade of brands and certifications, where human beings still trade with a smile and a handshake, whether on a field in Ethiopia, or in a market in Edmonton.

I want them to know the taste of a coffee born without a barcode.

Catfish Coffee is on sale every Saturday at the Old Strathcona Farmers Market in Edmonton, at 10310 83rd Avenue. Their retail location will open soon at 6507 112nd Ave. For inquiries, call 780-491-0771, or join the Catfish Coffee Roasters page on Facebook. Tell them French Press sent you!
Alberta Canada Catfish Coffee Coffee Edmonton 2009-02-28
+Daniel Roy

Previous: A Vegetarian with a Gun
Next: The Vegetarian Experiment: Conclusions 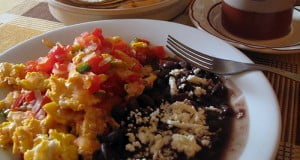