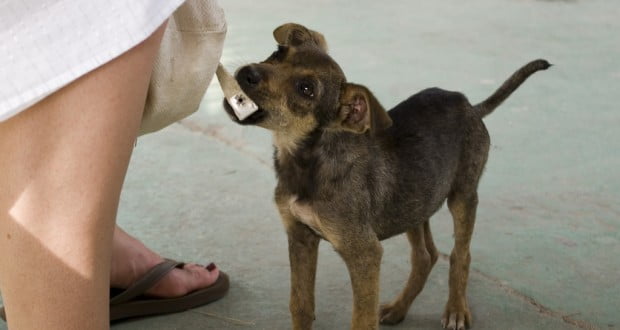 Stray dogs are so prevalent throughout the world that sooner or later, you’ll come face to face with a stray or two. 99% of the time strays will avoid confrontation with humans, but from time to time a dog might act confrontational, which can lead to a harrowing experience if you’re not familiar with dog behavior.

This happened to me a few times, especially in Thailand where most people are kind to strays and urban dog packs can thrive. These encounters led me to research this article. Foremost in my mind was finding a way to avoid confrontation without harming the dogs. Many people who offered advice suggested I run at them screaming or use mace. I may not be a fan of the dogs who bark at me, but I see no reason to harm an animal, especially when I’m the foreign intruder on their home turf.

Here are the results of my research, which I’ve applied successfully a few times.

This is the simplest, most important thing to remember. If a stray dog is barking at you from a distance, it’s most likely warning you to stay off its territory. It will stand at the edge of its territory and bark to warn you against entering it. As long as you remain calm and walk away from the dog, you should have no problem.

Cesar of The Dog Whisperer explains it better than I can.

(Caveat: I know that Cesar Millan’s approach to dogs is highly problematic, but the video offers sensible advice on reading stray dog behavior.)

Whatever you do, do not run away; dogs are likely to instinctively give chase, and there’s no way you’ll outrun them on a short sprint. This is the reason you see dogs chasing cars and motorbikes, not to mention, much to my annoyance, runners. Dogs who run you down are likely to bite your legs to make you stop.

For my fellow runners out there, be wary of dogs chasing you while you run. Dogs who are unused to runners might think you’re fleeing and might instinctively run you down. The only trick I’ve found is to stop and walk, then start running again when you’re further away. Sucks for your pace, but it beats a bite in the calf.

While you can always bluster your way through an encounter with a lone dog, dog packs are bad news. The dogs’ confidence is multiplied when they have their buddies around, and they know real well how to coordinate to take a threat down. What’s worse, dog packs don’t always signal their aggressive intent by barking; I’ve seen dogs in pack quietly flank a perceived threat without a sound.

If a dog pack is just lying about sleeping or acting friendly, you’re most likely OK. But trust your instincts on this; if a pack feels threatening even if no one is barking, don’t chance it. Walk away and find another way around even if it’s a long one.

An interesting note on dog behavior is that a dog who wags its tail is not necessarily friendly. Dogs wag their tail when they’re excited, and a dog who’s about to bite you will definitely feel excitement at the upcoming confrontation. As a matter of fact, many barking dogs wag their tails even though it’s clear they’re not being friendly.

This was the biggest “gotcha” for me as I learned about dog behavior. There are simple ways you can signal to a dog that you have peaceful intent. By performing these, you’re telling the dog that you mean it no harm, and you’ll avoid triggering its aggression. Remember that the majority of lone dogs are afraid of humans. By telling them in their own language that you’re not here to attack them, they’re likely to back down.

Some useful calming signals I often use:

Likewise, avoid acting dominant with dogs. This goes against the suggestion of many people, but just like with humans, if you escalate aggression, there’s always a risk that the other will follow suit. Remember, the goal here is to get away unscathed, not prove you’re more dominant than some stray.

Some aggressive behaviors to avoid:

Here’s a great video on the topic of calming signals:

Locals are a great help when dealing with stray dogs. As a matter of fact, you’re unlikely to have any real trouble as long as locals are nearby. The dogs will know them, and the people will know how to deal with the local strays. I’ve had a few hairy encounters with dogs in Thai temples (where whole packs thrive on the monks’ generosity), and monks saved my hide a few times. If no locals are around and you don’t know what to do to avoid injury, just yell for help.

Having cautioned you against aggressive behavior, let me now recommend something which the dogs will assuredly perceive as an aggression. Use this as a last resort if the above fails. Crouch and feign picking up a small rock. For some reason, this is a gesture that dogs all around the world have learned to recognize as a source of impending pain, which unfortunately says a lot about the abuse they often receive.

I’ve never had to use this one since I’ve learned about calming signals. But before I knew how to defuse a situation, I had to resort to this trick a few times, and it worked every time. It did make the dogs more aggressive, but they kept a respectful distance.

What to do if you get attacked?

If a dog attack looks unavoidable, use an object–a backpack, a stick, even your shirt wrapped around your forearm if time allows–to fend off an attack. Don’t try to hit the dog as it is likely to dodge and move within range. If attacked, use your forearm to shield your head and face at all costs. To escape the area, walk backwards from the attacking dog, looking at the dog indirectly.

After the encounter, get to a hospital as quickly as you can. If your rabies shots are not up to date, you’ll need to get a shot because many stray dogs carry rabies, which can be deadly. You’ll also need those bites treated against infection.

Mind you, if you do the above, a direct, physical confrontation is unlikely. It sure never happened to me, but truth be told, there have been times I have been worried it might.

Have you had encounters with stray dogs? Do you have advice on how to deal with strays? Please leave a comment below!

Previous: y Travel on Trust and Traveling Light
Next: How To: Extend Your Thai Tourist Visa in Chiang Mai