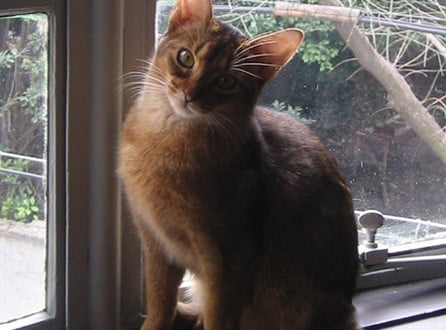 Although it’s freezing cold outside right now, the days were getting noticeably warmer last week… Something that surely didn’t go unnoticed, including by 西施’s hormonal system.

You see, 西施 (Xi Shi), despite being more than two year-old already, has never been in heat before. Turns out her brush with death two years ago (she had a huge respiratory infection – never trust pet shops in Shanghai) merely slowed down her biological clock. But no longer: Spring was in the air, and 西施 decided to answer the call of nature. Loudly.

Anybody who ever had a female kitten will tell you: there’s something both really tragic and really funny in seeing your sweet, innocent cat suddenly turn into a slut screaming for a stray to come and fulfill her carnal desires. For 西施, it felt like a constant struggle to cling to her innocence: she would call, but reluctantly, as if she were trying to hold it all in, and she seemed to think we wanted to punish her when we came close to her. Maybe we did, selfishly: after all, she made us sleep with earplugs for three days, not to mention annoying the neighbors enough that they called security. I let you imagine how loud it needs to be to annoy Shanghainese neighbors.

Her calling stopped Sunday, but it was already too late: the appointment with the vet was made, and I brought her to the clinic this morning, feeling vaguely guilty, and put her in the good hands of James Holder, of Shanghai PAW Veterinary Surgeons.

James and the people at PAW do a great job, and although you can find cheaper vets in Shanghai, I doubt you’ll find one better. They take good care of the animals, and James is the kind of straight-shooting, very competent vet. (He reminds me of Dr. Cox from Scrubs, although I have yet to see him ramble at anybody – maybe he does it at the cats and dog when no one’s looking.)

Anyway, 西施 is doing great now, thanks for wondering. She won’t be running as much for the next few days, but I’m sure it’ll return soon enough. And we’ll all sleep better with 西施’s carnal desires surgically removed.

2006-02-21
+Daniel Roy
Previous: I Wish I Was Exaggerating
Next: Breaking the Animal Crossing Addiction